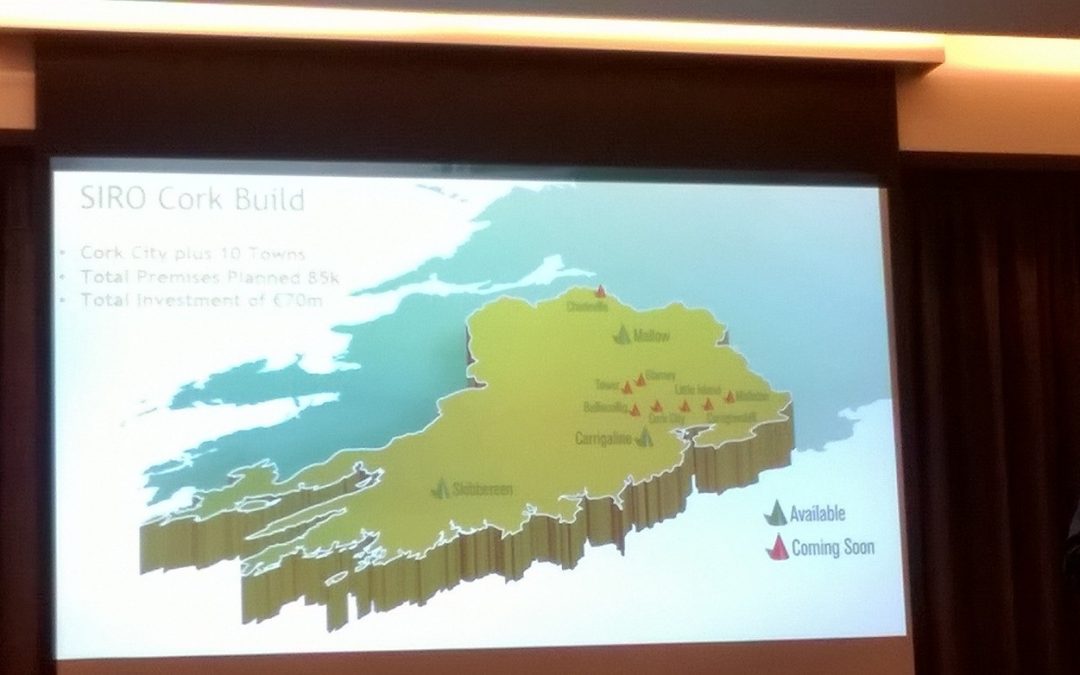 Murray Cloney & Associates Limited is delighted to announce and greatly welcomes  the proposed roll out of SIRO’s €60 million fibre broadband project to several cork towns, which we are delighted to say, includes our own Charleville. We were pleased to attend the launch of this €60 million project by Mr. Sean Atkinson, CEO, SIRO, at this morning’s breakfast event held in the Clayton Hotel Cork. Officially announced by An Tánaiste and Minister for Foreign Affairs and Trade Simon Coveney TD, we noted Charleville’s position on SIRO’s proposed timeline as the third town on their proposed timeline for roll out of super broadband connectivity which will be so important for the future development of the town. This news, coming days after the first meeting of the town’s socio-economic development plan is we believe, a game changer. In a chat to us after the event, Vodafone’s CEO Anne O Leary said that we only have to look to the town of Skibbereen to see the very real impact of the arrival of impressive broadband speeds and connectivity to business and the public alike.

So bring it on ….as soon as possible! The full press release is now available here

17th September 2018 – An Tánaiste and Minister for Foreign Affairs and Trade Simon Coveney TD has launched a new SIRO plan to provide Cork city with the best access to the most powerful broadband services in Ireland compared to other cities in the country. It marks the first time that SIRO Gigabit broadband will be built in a city of the scale of Cork, with over 65,000 homes and business premises targeted.

Building on the successful deployment of SIRO in the Cork towns of Carrigaline, Skibbereen and Mallow, SIRO’s Cork footprint will expand to include a further 10,000 premises in five new towns – Carrigtwohill, Midleton, Blarney, Tower and Charleville. SIRO has built a network of over 185,000 premises in 40 towns around Ireland and Cork (totalling 85,000 premises) will be the largest single SIRO investment, with the €60 million construction plans announced today bringing the wholesale broadband operator’s total spend in the county to €70 million.

SIRO has appointed Huawei as its build partner for the Cork city rollout marking the latest in a series of partnerships between the two companies. Huawei is providing end-to-end network equipment for phase one of SIRO’s rollout to 50 regional towns and is currently SIRO’s build partner in Athlone. The two companies also collaborated to run a successful trial of XGS-PON technology on SIRO’s 100% fibre network, which achieved speeds of 10 Gigabits per second.

The TLI Group, which has already worked with SIRO on its Carrigaline rollout, has also been appointed to deliver Gigabit connectivity to five new towns added to the wholesale broadband operator’s construction plans. Carrigtwohill, Midleton, Blarney, Tower and Charleville will now also gain access to SIRO’s Fibre-to-the-Building technology, which is recognised as the gold standard for broadband connectivity internationally and is 100% fibre-optic, with no copper at any point to slow it down.

Commenting on the announcement, An Tánaiste and Minister for Foreign Affairs and Trade Simon Coveney TD said: “Gigabit connectivity will have a transformative effect on Cork city as Fibre-to-the-Building is recognised as the gold standard for broadband internationally. As a result, this will give Cork businesses a head start against their peers both at home and internationally, as well as giving homes access to the latest innovative digital services. This substantial investment by SIRO is another sign of how Government has encouraged investment by the private sector to boost our broadband capability. Cork stands to benefit substantially as highlighted by 10 other towns in the county all forming part of SIRO’s rollout.”

Sean Atkinson, CEO of SIRO, added: “While Cork is traditionally seen as the second capital of Ireland, today’s announcement will firmly establish it as the broadband capital of Ireland. Our Gigabit connectivity will complement Cork’s rich technology heritage and put it on a par with international cities like Hong Kong and Tokyo. Cork city is ideally placed to leverage this with in excess of one million square foot of office space due to come on-stream over the next year, with rental prices less than half the price of equivalent space in Dublin on average; a 23% lower cost of living; and a talented workforce with half of the Cork population under 35 years of age. SIRO is proud to help power a digital transformation in the city, as well as the five new towns revealed today, benefiting residents and businesses alike.”

Eric Yang, President of the Vodafone Account at Huawei, also said: “Huawei is delighted to be delivering SIRO’s 100% fibre-optic broadband to Cork City, designing and building a network that will future proof Cork City’s broadband requirements for generations.”

Speaking at the launch, Cork Chamber President Bill O’Connell added: “Given the strong growth of sectors such as global financial services, fintech, ICT, SaaS and cyber security in Cork, it is absolutely essential that business is supported by the best quality connectivity. We have the lowest latency transatlantic connection in Europe, new connections to mainland Europe in planning and now the local connectivity to match. It builds further resilience for an economy increasingly driven by data.”

SIRO is a joint venture of ESB and Vodafone which is investing €450 million in building Ireland’s first 100% Fibre-to-the-Building broadband network. Using the existing ESB network, SIRO delivers fibre optic cables all the way to the building. This technology, known as Fibre-to-the-Building, has no copper connections at any point to slow down the network and delivers 1 Gigabit speeds. For context, downloading a high definition (HD) film of 4 GB (Gigabytes) with a 10 Mbps connection takes an hour – with SIRO it takes 30 seconds.

The wholesale broadband operator’s network is now live in 30 towns across the country, with 10 retailers offering connections to over 185,000 homes and businesses. SIRO is offered on an open-access basis to all telecoms retailers in Ireland.  SIRO has formed partnerships with 10 operators – Vodafone, Digiweb, Sky, BT, Carnsore Broadband, Rocket Broadband, Kerry Broadband, eNet, Airwire and WestNet – with more retailers expected to come on board as the company drives competition in the wholesale broadband market.